What does the word free really mean?

pertaining to or reserved for those who enjoy personal liberty.”

If you then look up the word liberty, you find,

I have had the privilege of serving in Ghana on several mission trips. One of the places we visited while there was the 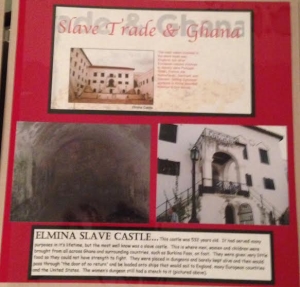 Elmino Slave Castle. It is a place where many Africans sold into slavery were held before they boarded a ship to sail further into captivity.

In 1863, President Abraham Lincoln issued the  Emancipation Proclamation, which declared,

that all persons held as slaves” within the rebellious states “are, and henceforward shall be free.”

Yet, were they really? Were they allowed the same privileges and rights as their former slave owners? Could they hold the same types of jobs? Own property? Were they treated with the respect and dignity they deserved?

Now fast forward 152 years later. I work with survivors of sex trafficking, in the same country. This atrocity is referred to by many as modern day slavery. Men, women, and children are held in mental and emotional bondage if not physically bound. When they are rescued from their traffickers, are they really free?

SURVIVOR STORY 1: Hope spent the night in her first restorative care facility. She was placed in the assessment side of the home, where the only people there were her and the overnight staff member. It was time to go to bed and she was told they require all internal doors remain open so staff can make sure no one sneaks out or in during the night or does any form of self harm. Hope felt vulnerable. She couldn’t sleep. She sat up in the room all night, fearful that at any minute someone was going to walk through the open door and rape her. She left the program within 30 hours of checking in only to be alone on the streets again.

SURVIVOR STORY 2: Hope escaped her captors and her drug addicted/drug dealing husband and traveled three states away. Her captors told her she would never be free; they would hunt her down and find her. She and her children moved in with a close friend who works to get her the assistance she needs, financially as well as care for her physical needs. Hope was skin and bones when she arrived as well as addicted to a drug her captors kept her  on so she would do as she was told. Every car that drives by the house where she lives causes her to go to the window and make sure it doesn’t stop. Each time she rides in a car somewhere, she looks over her shoulder as she enters a store or doctor’s office to make sure she isn’t being followed.

SURVIVOR STORY 3: Hope was ready to try a long term recovery center that required an airplane flight to get there, something she’d never done. With security checks, flight delays, extreme turbulence, and a closed rental car company upon her arrival, Hope’s nerves were raw. After securing another rental car and driving an hour and a half to the town where the recovery center was located, it was time for bed. Hope had been awake for almost 24 hours. She paced back and forth in front of the bed like she was about to jump out of her skin. When I finally told her I was going to turn out the light and she climbed in bed. In the darkness I heard her crying. When I switched the light back on and asked her what was wrong, she said,

I’ve never been in a hotel room that I wasn’t being raped.”

That thought never crossed my mind when I took her there. We left the lights on and I sat beside her, rubbing her back and singing lullabies over her until she fell asleep. When she woke the following morning, she told me that was the first night she’s sleep all night long since she was first victimized by a family member at 3 years old.

Those who deny freedom to others do not deserve it for themselves.”

Freedom is a right and a privilege for American citizens protected by our laws. We call our country the land of the free and the home of the brave. We sing those words in our national anthem. Yet, some still aren’t free.