Skip to content
Previous Next
DO YOU SEE WHAT I SEE?

Are you going to be doing any traveling over the holidays? If so, will you be staying with family or in hotels?

I want to encourage you to keep your eyes open; look beneath the surface.

This week, a friend of mine shared how he was traveling to a hockey tournament with his son’s hockey team. In the past few years he has become very aware of the issue of human trafficking and reads everything he can get his hands on to educate himself.

He wants to be part of the solution so he is taking active steps to learn what he can.

Friday evening as he sat in the hotel lobby waiting on his son, he noticed a very young lady walk into the hotel lobby dressed a little scantily. She walked up to the front desk and asked where the elevators were located. Once she was directed to the elevators, she disappeared.

Because my friend was paying attention, he noticed several things in that few minutes:

While he didn’t really have anything to report, he had taken notice of the situation.

The following morning, he was sitting in the lobby again, this time enjoying a cup of coffee while the team finished breakfast. He noticed the same girl coming off of the elevator, visibly upset. She was talking to someone on the phone. He heard her say,

Why did you leave me there with him? He frightened me. Why didn’t you come get me? You need to get here now?”

My friend recalled what he had witnessed the night before and immediately knew there was more than just a possibility that this young lady was a trafficking victim.

What do you do in a situation like this?

Do you go all Liam Neeson like in the movie, Taken, and use your special set of skills? Do you put yourself in harms way? Of course not! But you have to do something, right?

Back to my friend…

He was aware of the general indicators of sex trafficking as a result of his research, so he knew what he was seeing. He immediately responded by going to the front desk. He asked the clerk,

Are you seeing what I’m seeing here?”

Sadly, she was clueless. Her hotel had not trained her on what to be aware of or protocols for reporting suspicious activity. Thankfully for the young lady, my friend knew how to respond.

He told the clerk to call the police immediately and tell them to come and come quickly. He feared the young lady would be picked up and the opportunity for rescue would be lost.

As she walked out of the front door of the hotel a car approached. My friend followed at a leisurely pace with his cell phone in his hand.

He noticed the man driving the car was a different race than the young lady and he guessed the driver to be in his mid-50s. He held his cell phone as he would to text and managed to snap a quick photo of the license plate of the car without drawing any suspicions of the two in the car.

The police arrived shortly after the car pulled away. He gave the information to the police along with the license tag of the car.

The police stopped the car in question and, in fact, rescued the young lady who was a victim of sex trafficking.

They were also able, with her testimony, to break up a trafficking ring in the area. How? Because someone was paying attention and reported what they saw.

If you see something, say something.

You don’t have to be certain you’re looking at trafficking. Just report what you see and the authorities will sort out the details and determine how to respond.

Take our your cell phone right now and add the National Hotline Number to your contacts. 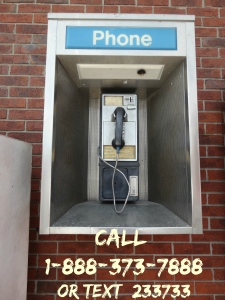 They have people on call 24 hours a day, 7 days a week, 365 days a year. They speak 170 different languages so they can help anyone at anytime with their call.

You could #BetheKey to someone’s rescue, someone’s freedom.

There couldn’t be a better gift to give someone this Christmas.

As you go about your business this holiday season, whether you’re traveling to see family or just out shopping and dining with friends at home, pay attention. Take notice of those things that are often hidden in plain site. Make yourself aware of the indicators. You can find them here. If you see something, say something.

If you would like to partner with Rescuing Hope and the work we are doing to eradicate sex trafficking in America, donate here. You tax deductible gift will assist us in the development of digital curriculum to reach middle school students BEFORE they become victims. Help us educate a generation and change our culture!