Skip to content
Previous Next
WHO IS THE REAL ENEMY?

Have you seen the movie, Caged No More? It released on Thursday, January 22nd in theaters across the United States. 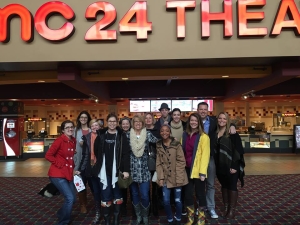 Rescuing Hope and friends going to see Caged No More in Kennesaw, GA at AMC Barrett 24.

Some front line organizations and reporters have taken issue with this film. One article called it misinformation about the issue of human trafficking and stated it was creating an uphill climb for advocates who are on the street trying to make a difference.

If there is one thing I’ve learned in the fight against human trafficking,  it is we all have our own point of view…biases if you will, whether street level advocate or someone stepping into the fight for the first time.

We have to stop throwing stones at one another and remember who we are fighting.

We are on the same team, fighting the same enemy. Yes, there are some absolutes, but there are also many things that are regional and we need to give one another the benefit of the doubt. If in doubt, start digging. Ask questions. Educate yourself further before making blanket statements.

I once spoke at a conference where a highly revered officer in the Midwest, who is part of the FBI Innocence Lost Task Force, stood and said,

Victims are not using hard drugs like heroin or meth, but usually gravitate towards cheap drugs, like marijuana.”

That may have been true where he battled human trafficking, but one of the first victims I ever encountered was as high as a kite on heroin when I met her. Another survivor I mentored lost her battle against the mental and emotional trauma that comes with human trafficking and sought escape in heroin and overdosed. Heroin is a part of human trafficking in Metro Atlanta.

I was approached by the Caged team in November of 2015 to join them as the southeastern spokesperson and help educate church pastors and para-church organizations on the issue of human trafficking through a series of webinars. I told them I would have to review the film first.

After watching the movie multiple times, I reached out to the producers of the film with my issues with the film. My concerns were:

[SPOILER ALERT. IF YOU HAVEN’T SEEN THE MOVIE, THIS WILL GIVE A LOT AWAY.]

I shared my concerns with the producers and they were quick to validate them. Their response was to acknowledge that this movie shares one way trafficking happens, based on true accounts. Their desire was to raise awareness. They wanted to find a way for churches to address this issue by providing a faith based film to start the conversation. After talking with them at length, I decided to attach to the project.

I’ve heard a variety of complaints.

What about boys? They’re not addressed in this film.”

I just wish someone would produce a film where the victim wasn’t a white girl from suburbia.”

The vast majority of people will not view a documentary about human trafficking. We’d like to think the issue would matter enough that they would, but the reality is it doesn’t happen. We know this because there are many great documentaries out there like Nefarious and Very Young Girls. Those, too, didn’t cover every facet of trafficking, yet people didn’t bash them.

John Q. Public will go to the movies. Caged used that platform to shine the light on evil, even if it is just one corner of that evil.

To address the issues raised, yes, it happens to boys, more than we realize or discuss. It only takes listening to survivor,  Jerome Elam, or the founders of Restore One, Chris and Anna Smith, to learn how prevalent it is. Thankfully, the Smiths are opening up the first restorative care facilities for male survivors 12-17 called Anchor House.

Not only does this issue impact girls and boys, but it impacts men and women too. It is not a respecter of persons. Victims are white, black, Hispanic, Asian, and Middle Eastern. Traffickers are not discriminate. It is all about the money to them.

As one survivor told me,

My pimp saw me as an ATM. When he needed money, he expected me to give it to him.”

My plea is to everyone fighting against this evil… to the front line organizations, law enforcement officers, restorative care facilities, survivors, and individuals just diving into this issue for the first time:

Can we all remember who we are fighting against? It isn’t each other.

We are fighting the same enemy and fighting for the same thing… the eradication of human trafficking from our world.

Let’s have one another’s back!