Skip to content
Previous Next
COLLEGE STUDENTS CAN BE TARGETED TOO!

I had the opportunity to speak to the Phi Mu Sorority at the University of Georgia this week. It was great to have the chance to educate them on the issue of sex trafficking in America.

As always, we covered the basic questions people usually ask:

I also wanted to educate them on some things they may not know, like:

I have had the opportunity to interview a former trafficker who primarily targeted college girls for her brothel. She shed a great deal of light on how it happens and I was able to pass the information along to help the Phi Mu Sorority be more alert and prepared.

The trafficker told me how she looked for three types of girls:

I would look for girls who were into fitness. If they were already into health and fitness, they were less likely to pack on the pounds with pizza and beer.

I would also seek out the girls who had an eating disorder. They were accustomed to throwing up their food, so they wouldn’t devalue the merchandise with poor eating habits.

I also looked for girls who had student loans that needed to be paid off. They were an easy sell if I could show them how they’d make more money working for me than a fast food restaurant.

After she met the girls and started spinning a tale of how she could help them land some big money, she would strike an initial deal with them where they would work for her taking 60% of the profits for themselves and leaving her with 40%. Her big push line was,

“You’re already having sex with people for free. This way you can make money doing it.”

Once she had them on the hook, she would reel them in and start making big money. She would book them with high end clients at first so they would see big money coming in before things changed. Then it would become apparent they weren’t just going to walk away.

If people tried to burn her, she would ruin their lives with reputation smear campaigns using social media to leak pictures and video and she would falsify police reports and leak them as well. All it took was several girls to witness her destroying one girl’s life to know she meant business.

There were a lot of questions about how to avoid falling prey to this type of crime. It was a great opportunity to spread the word and equip 150+ girls to share what they learned with fellow classmates on their campus. 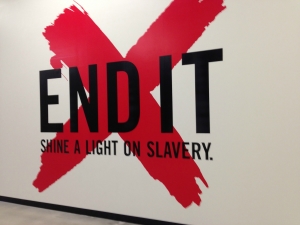 I also had the opportunity to meet with some of the leadership team of the End It Movement UGA to talk about ways they can be further involved in the fight.

I love when college students grab hold of this issue. They will not let go and are always looking for new and creative ways to raise their voices and cry out for those suffering injustice.

If you or someone you know is a college student, high school student or middle school student looking for a speaker for their fraternity, sorority or special interest group on this topic, please email us at info@rescuinghope.com or you can fill out a speaker request form here.