Skip to content
Previous Next
WHAT WOULD YOUR SON HAVE DONE?

Have you ever been to Washington DC? It is a wonderful place full of museums, historical sites, great food, shopping and PEOPLE. Lots and lots of people. It’s population in 2016 is estimated around 7 million people. That doesn’t take into account the thousands of visitors who descend on the city throughout the year, of which I was one.

I was in town for the National Foundation of Women Legislators Summit on Human Trafficking. It was a fabulous conference. Before the conference began, I had a meeting in the city with the National Center on Sexual Exploitation‘s founder, Dawn Hawkins. She picked me up from my hotel and we drove into the city to have breakfast at Old Ebbitt Grille, one of the oldest restaurants in Washington DC, which is located just a block or so from the White House.

Following our meeting, I did a little site seeing and then purchased a Metro ticket to take the subway back to my hotel in Alexandria. I looked at the map and found the line I was supposed to be on and my stop. With five different lines and hundreds of people coming on and off the trains quickly, it can be a bit confusing.

I stepped onto my train and as I took my seat, the doors closed. That’s when I saw him. A little boy was standing by the doors as they closed and he began to bang on the doors with his fists,

As the train began to pull away from the platform, he looked around at all of the adults looking at him and quietly took a seat. A man behind me said,

At this moment I knew two things for certain.

Back to the Metro…

I reached out my arm with my cellphone in hand and said,

Here, call your mom. Tell her that you got on the wrong train and that you’ll be getting off at the next stop and wait for her.”

At first he tried to play it cool. I said it again, then other people on the train told him to do it. He came over to sit beside me and dialed the number. I could hear the other end of the phone call. It had gone to voicemail. He hung up the phone, hung his head and began to cry. My heart broke and my protectiveness rose to an even higher level.

It was then I learned my little friend’s name and that he was only 10 years old. 10 people.

You know- I’m sure you know because I tell you all the time- the average entry age into the sex trade for boys is between 11-13 years old. My little friend was a prime target, being lost on a subway in a city alone. NOT ON MY WATCH!

I called the number back and left a message with my name, my organization and that I was with her son and would get off at the next stop with him and wait for her to come on the next train.

He appeared to trust me then and he got off of the train with me and we sat on a bench watching for the next train. I have to say I was both relieved and alarmed at how easy it was for me to gain this young man’s trust go and convince him to go with me.

What if that had been your child? Would he have known what to do? Not all pedophiles look like monsters. Most of them look like nice people.

My phone rang and it was a hysterical woman on the other end, the mom who was in Texas while her son was in Washington DC with grandma, or was supposed to be anyway. I calmed his mom down and told her she needed to act quickly and get in touch with grandma, who had no idea where her grandson was at this time. I gave her instructions. Grandma called next and I told her how to find us.

While my new little friend and I waited, I decided it was time to educate him on prevention and safety. I talked with him about what to do if this happened again. When you hear the rest of the story, you’ll realize how critical that was.

My little buddy was very attentive and seemed fine as long as I was talking with him. So we talked and talked. We talked about how we were both middle children in a family of three children and agreed that middle kids are the best. He told me he thought I was pretty cool. I gave him my business card and told him to call me if he ever had any questions.

Finally, after 45 minutes of sitting on the bench, he saw Grandma on the approaching train. She jumped off and they hugged. I told her,

I’m glad he’s safe. This is my train, so have a great weekend.”

Grandma hugged me and then said,

We’ll just ride on the train with you for a minute.”

I was on the train already and she stepped on it but left Christian standing there on the platform. The doors were about to close, so again, the mama bear in me sprung into action, I screamed his name and he turned to look at me,

He stepped on the train, looked at me with a goofy grin and held up my business card. At least if he’d been left behind that time, he would have known what to do.

Take time to talk with your children and role play situations, giving them the opportunity to mess up when it doesn’t count so they’ll be prepared when it does.

Keep your eyes open for others out there who may need a mama bear  or a papa bear to step into their situation and be willing to be that person. 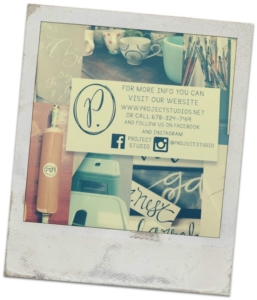 ****On a side note, I came across a great little business that just opened in Metro Atlanta called Project Studio. They have beautifully creative gifts for sale in the front of the store and then in the back of the store they have a work space set up where you can create your own masterpieces, either with assistance or on your own. They have only had their soft opening, but will be announcing their grand opening soon. I plan on spending some time in there because one of the creations you can make is a t-shirt that says MAMA BEAR on it. I think I must have it. Now their take on it is you make one for yourself and then you make little shirts for your children that say BABY BEAR, however, I think MAMA BEAR will suffice for me. Who knows, I might see you there!